A downloadable playground for Windows, macOS, Linux, and Android

jarotsim is a playground for the discovery, exploration and livecoding of turing machines.

its objective is to promote experimentation and visualization of these foundational computational machines in a playful and joyful way.

jarotsim is programmed using LÖVE 11.4 and it is distributed as a .love file.

you can play this file in your mobile or not-so-mobile device(s) by first downloading LÖVE for linux, macOS, windows or android.

the bird with a hat stands...

the bird with a hat has a table of rules that tells what to do next.

the table of rules is read as follows: given a specific pose of the bird with a hat, and a specific tile design in the row where the bird is standing:

the process is repeated over and over again. it might never end, unless the table of rules tells the bird with a hat to stop.

and yes, in case you didn't know yet, all of that is what a turing machine does! 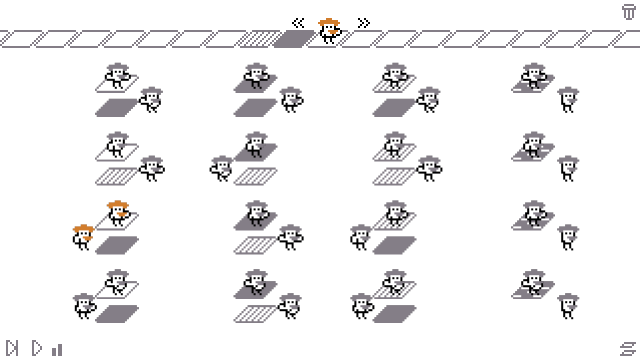 the top section of this screen allows you to modify:

you can clear the row of tiles by clicking on the bin icon at the top right corner.

the rest of the screen allows you to modify the table of rules.

there is one rule for each combination of pose and tile; therefore there are sixteen rules.

depending on the size of the screen, you might be able to see them all, or you might need to use the arrows to rotate between the pages of the table.

a rule consists of the following elements:

the table of rules highlights the rule that would currently apply, given the pose of the bird and the tile design where they are standing.

the halt pose will hide the new tile design, and additionally it will never be highlighted. 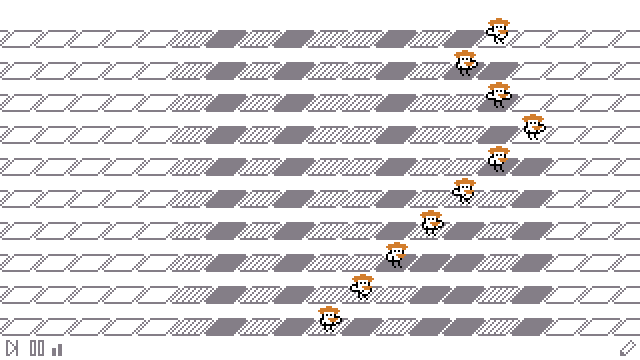 the timeline mode accumulates several past iterations of the process so that you can see its evolution.

when the screen has been filled, the timeline automatically scrolls so that the current state is at the bottom.

the previous states are always arranged relative to the bird with a hat in the current state.

it's very encouraged to use this mode as a source of visuals for algoraves.

the toolbar at the bottom has the following buttons, from left to right:

the toolbar can be used regardless of the mode that jarotsim is on.

therefore you can e.g. see how the rules are applied live, and even modify them while the bird with a hat is moving.

note that the bird will pause when it arrives at a rule with a halt pose. you won't be able to step or press play until you change the rule, the current pose, and/or the current tile design.

the initial state of jarotsim is based on a turing machine described by Wolfram in A New Kind of Science, page 80.

it will generate an ever-growing and complex sequence starting from an empty row of tiles.

feel free to modify the rules to observe the changes in the behavior of the process.

additionally, we invite you to attempt the following:

have the bird with a hat...

setting up the sixteen possible rules in the table can be a little bit overwhelming, so remember that you can "turn off" a rule, a column and/or a row by using the halting pose.

we will really appreciate it if you are able to pay for jarotsim, because you will help supporting our projects of human-scale computing and movement! 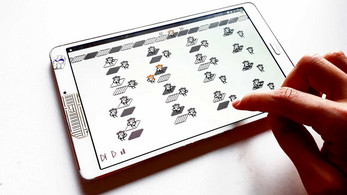 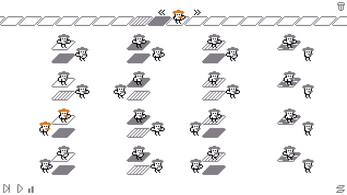 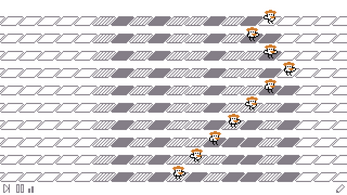 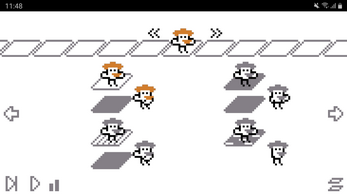